The circensic scale of education

Schooling the horse in circensic dressage becomes more and more popular. Back then, when I began to train circus, I was often ridiculed, but today the circensic way gains more acceptance, even if there is still development potential. Maybe it’s because of the misbelief, circensic is just kid’s stuff or for those, who can’t ride or handle their horses in any other way. Of course – circus should be fun for both, trainer and horse, but it’s still a serious training method with it’s own, consecutive scale of education.

Similar of the dressage scale of education, every single task is build up on the previous step in a logical way to complement. 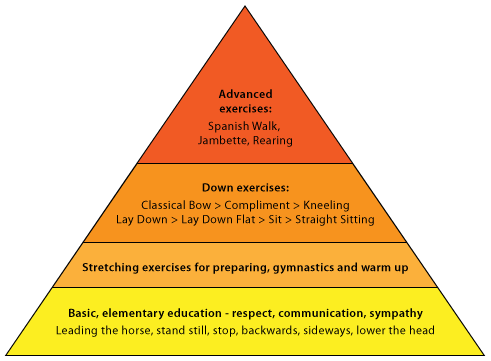 The circensic scale of education

The basis of the circensic is not even the scale itself, it sooner begins with the decent education of the horse. Before you begin, your horse should go through the elementary school of ground work and have passed all the self-evident things you need to handle your horse like going forward, backward, stop, sideways and lower the head would be nice to have too. The better the horse is prepared on the ground, the more easily manage the entry.

That is truly not only for the horse, but for the human. If he has trained the horse on himself or stayed beside when the horse was trained, he is well prepared for the common exercises too. So both, horse and trainer, have the chance to create a harmonious, understanding and respectful relationship before they try to walk on the path of circensic education.

If you’re feeling like some of these requirements are missing, a conscientious and sympathetic education will improve the desirable connection and would help you to bridge existing deficiencies.

Several stretching exercises are absolutely essential to prepare your horse for circus. They are also good for the muscular release and gymnastic training of the horse and of course necessary to warm up.

From the stretching exercises you will develop the first step: the classical bow. The horse stretches the forelegs to the front and bows backwards-down on hindquarters, first with a lowered head, later with the head straight up.

The second and most important stage of the education scale is the compliment which is considered as the basic lessons the following education is built on. The movement is similar to the classical bow. The horse sinks backwards-down but rests on the angled foreleg.

After the kneeling, the next logical step is to lay the horse down. Standing next to the horse, just bend his head next to you until it rolls off his shoulder to lie down. Optionally, you can use the „end of trail-position“ by touching the hind legs with the whip to ask the hind legs moving forward.

And now following the change from upright to lying flat, in which the horse is laying on its side and stretched out all four legs. This lesson requires enormous trust. The horse needs fully trust the leader to take place in this defenseless attitude where – in his nature – just one mistake can take his life away.

Well versed in upright and flat lying, the next step follows seamlessly: to sit up.  The sitting is developed by the interruption in the movement to get up. The horse stops with its front legs stretched forward and then pushes back in an upright position. First the horse is still sitting a little bit a side. But with a little more time they’ll learn to move the forelegs in front of the hind legs and bring the weight up even on both „buttocks“.

The horse can now handle all the lessons down to the ground, so that you usually assume that needed respect for the following exercises is present to proceed the advanced exercises „above the ground“ like spanish walk and rearing.

Therefore, the trainer should have enough know-how to handle most reactions that may occur and manage mischievous or even aggressive behavior, since these tasks are dominant gestures from the natural repertoire of behavior of the horse.

First the horse learns to move the front legs, one after another, as straight as possible to the horizontal: the spanish walk. By increasing the training occurs an approximate diagonalization of footfall, similar to trot. Maybe adding some variations such as the jambette (one leg hold in horizontal position) or the spanish trot (similar to the passage but with an outstretched front leg).

Through fast, alternate lifting of the front legs, you can develop the rearing where the horse lifts both forelegs and bring his full weight on the hindquarters. It’s just like asking for the spanish walk with both front legs at the same time.

Basically, it is possible to teach the spanish walk, and even the rearing, independently from the down exercises. Anyway, it is safer to stick to the circensic scale of education, because you can assume the necessary knowledge is available.

Regardless of the classical circensic lessons you can teach your horse various tricks as well, such as saying „yes“ and „no“, crossing legs or roll out a carpet. Tricks can be trained entirely independent and can be combined with any other exercises.  Just let your imagination run wild.

The video which comes with the article:

When you’ve read the article in english, it would be helpful for me if you click the „like“ button, to see if I should write further articles in english too …

Sady, your website is STUNNING! And I am honored to find my photo’s on the banner on your website, thank you for that! I also love your new video where you show all the steps with Tarek. Give him a big fat kiss from me!

Your photos are great and I’d love to have you hear again, feel free whener you want. But we’ll see for sure on hyves.nl meeting at equiday 😛

Oh yes ofcourse we will! I would love to come and visit you and Tarek again. I have my new objective for my camera now, it makes amazing pictures. And we will meet on Equiday as well!